The blue roan horses are unique and highly sought after, thanks to their striking blue appearance.

But did you know that their coats aren’t blue?

That’s right. And in this post, we discuss what makes the coats blue, which horse breeds have the blue roan genes, and other variants of roan horses.

READ MORE ABOUT: All Types of Horses

What Is A Blue Roan Horse?

A blue roan horse is a horse with an equal balance of black base coat color and white hairs. This equal distribution is what gives them the blue color.

However, the lower legs, tails, and head often feature a solid color with little to no white hairs.

Several horse breeds are referred to as roans when they aren’t actually a breed. That’s because the “roaning” feature results from a genetic mutation (more on this later), and if the parent horses don’t carry the gene, then the offspring can’t be roans.

Blue roan foals, or roans in general, don’t show this characteristic immediately after they’re born. They’ll be dark grey or black at birth, and the roaning effect will appear after shedding the first foal coat.

The brightness of the blue roan horse varies depending on the seasons (e.g., darker winter coats and lighter in warmer months). But roans don’t lose their original coat color over time, like the gray horse (more about them in a minute).

Blue roans are just one type of roan-colored horse. Generally, roan horses are horses with an equal distribution of white hairs and other background colors. The American Roan Horse Association recognizes 3 types of roans.

The second type is the red roan horse, a horse with an equal distribution of white hairs and chestnut background color.

Sorrel roans and horses with a pinkish base color were once referred to as Strawberry roans, but they now fall under red Roan category.

Bay roans are also a type of Roan, and they are horses with a mix of white and bay base coats.

Bay roans were considered part of the red roans until 1999 when bay roans got their own category.

The genetics behind the Roan Coloring

As mentioned earlier, the “roaning” is caused by a dominant gene. This Rn allele symbolizes this gene.

Being dominant means that this gene can mask the characteristics of another variant gene. Being dominantly inherited, both parents need to have the gene to produce a roan offspring.

In cases where one parent didn’t appear to be a roan but still gave birth to a roan foal, they could have the gene, but the roaning characteristic isn’t always prevalent.

The genes responsible for the specific roan colors include the “E” gene for black and “e” for chestnut. For a bay roan to occur, the black gene “E” has to be present, as well as the Agouti gene (“A”).

On the other hand, homozygous roans have two copies of the RN gene. As a result, 100% of its offspring will bear the Rn gene.

Knowing what type of Roan the horse is is essential, especially when you want specific characteristics in your foals.

For instance, blue roan foals don’t come easy since it’s difficult to align all the required traits in the parent horses.

There’s no difference in appearance between the heterozygous and the homozygous Roan. So, to distinguish between the two, you may need to conduct a DNA test, also known as the roan zygosity test.

This test was developed by the University of California, Davis School of Veterinary Medicine.

However, the mutation responsible for the “roaning” characteristic hasn’t been established yet. But breeders have been trying different combinations over the years.

Earlier, people believed that the homozygous gene was lethal, and most of the foals were born dead. But this has proved untrue since there are many homozygous blue roan stallions today.

Another unique feature about roan horses is that if they get injured, or part of the skin gets damaged, it recovers as a solid color. Instead of white hair, which usually happens, the hair will be the base color.

These patches of solid colors on roans are also known as “corn marks” or “corn spots.”

Horse Breeds with the Blue Roan

Several horse breeds have color patterns that resemble blue roans or any other roan, but not all are roans (I will discuss some mimics later in the article).

As I’ve already discussed, a true roan has to have the right genes. Most breeds with the blue roan gene originated from North America and Europe, and below are some of them.

American Quarter Horses were bred for running a quarter-mile race. That’s when they acquired the name.

They’ve been bred for racing and high performance for more than two centuries. Some of their parents include the Thoroughbreds, Wild Mustangs, Belgians, Percherons, and other native horses from Spain.

They may have inherited the true roan gene from the European horse breeds.

Today, there are 17 acceptable colors of the Quarter Horses according to the American Quarter Horses Association, and those colors include the blue Roan, red Roan, and bay Roan. Others include chestnut, gray, black, and brown.

They are also considered one of the first warmblood horse breeds – this means that they are not as nervous as the hot-blooded horse breeds such as the Thoroughbred, and they are more athletic than the cold blood horses.

A famous roan Quarter horse is the Red Man (1935), a descendant of Joe Hancock, a champion in the rodeo open.

For more information about warm-blooded horses, check out this post – What is a warmblood horse?

Percherons are famous draft horses that came from France.

According to Brittanica.com, the first Percherons resulted from breeding the Flemish horse (a popular Medieval period horse) with Arabian horses to produce horses that could draw coaches.

But they were later developed as draft horses for farm work. They are also quite large, growing up to 17 hands (68 inches) and weighing up to 2100 pounds.

The Belgian is another popular draft horse (though not as popular as the Percheron) that also resulted from crossing the Flemish horse (also known as the great horse) with other horses.

Like any other draft horse, they are huge and can weigh more than 2000 pounds. They are also known for their calm temperament, and they fall in the category of cold-blooded horses.

Belgian horses occur in all roan colors, sorrel, chestnut, and bay. Blue roan Belgian horses are more common in Europe than in the US.

The American Paint Horse is a breed of horse that has a mixture of white and other colors.

These colors can be blue Roan, palomino, black, dun, chestnut, or bay. Those with a solid color are referred to as “Solid Paint Bred.”

There are 3 main color patterns of a paint horse;

All these patterns can feature roaning characteristics.

Despite their relatively small size, the Welsh Ponies are quite strong. Hailing from Wales, Welsh Ponies were very useful in coal mines, pulling carts in arenas, and working in ranches.

The Paso Fino is a horse breed that’s widely known for its naturally acquired 3-speed gait.

The stride length varies with speed, and they develop it from birth. Paso Finos are also known for being swift, well-built, sure-footed, and athletic.

This breed originated from Puerto Rico when some Spanish horse breeds such as the Andalusian, Jennets, and Barbs arrived with Christopher Columbus’s voyage.

All colors are acceptable by the Paso Fino Horse Association, including roaning colors. Other colors include chestnut, bay, and brown.

Other Horse Breeds That Can BE Blue Roan

As mentioned earlier, some horse breeds may look like roans, but they don’t contain the gene. Below are some of them.

Gray is one of the most common coat colors and one that is often mistaken for roaning. However, unlike in roans, grays develop a lighter color as they age since they grow more white hair.

That’s why you’ll find mature grays that are white. Arabian and Thoroughbred horses lack the roaning gene, but their gray varieties are often registered as roans even though they aren’t true roans.

The Rabicano color pattern is slightly similar to the Roan since it involves the distribution of white hairs and other base colors. This coat pattern is also known for the white rings at the tail’s base, known as the coon tail.

However, unlike the roans, where it’s an equal distribution, in Rabicanos, the white-colored hairs are more concentrated in certain areas such as the tail or the rib cage.

Some Thoroughbreds or Arabian horses that are considered “Roans” are usually Rabicanos.

Another color pattern that features white hair is the Sabino. Unlike the Rabicano, the white hairs are irregularly distributed across the horse’s body.

This irregular distribution can lead to a similar effect to roan hairs on some sections, but these horses aren’t roans.

The Varnish is a type of leopard complex color pattern found in the Appaloosa horse breed. It comprises a mixture of white and other colored hairs, that’s why they can be mistaken for roans.

However, the face or any other patches of skin close to the skeleton often have a solid color, with little to no white hair.

These sections are known as “varnish” marks. As mentioned earlier, a true roan would only have darker patches (corn spots) when the skin is damaged.

Also known as grullos, Duns can also be mistaken for blue roans since they have a bluish appearance. However, they lack white hair, and the bluish hue is due to a black horse having fewer pigments in the black hairs.

Note: Each of these lookalikes can still have the roan gene. Don’t be surprised when you find a gray horse that’s roaning.

The History of Roans

It’s not clear where the roan gene came from, but they’ve been mentioned throughout history, especially in William Shakespeare’s works.

The most notable mention is when William Shakespeare described King Richard III riding a roan horse named Roan Barbary. Researchers believe he loved roan horses, or he even owned one. That’s why he referred to it often.

Below are some naming ideas for a blue roan horse;

What Does Blue Roan Mean?

Blue roan means any horse with a bluish hue. This blue appearance is caused by a distribution of white hair and black background color.

How Many Types of Roan Horses Are There?

There are three main types; blue (black base coat color), red (chestnut background), and bay (bay background). But you can find roans with a wide range of other background colors.

How Much Does A Blue Roan Cost?

Not really. Blue roans are fewer than the other roans, but they aren’t rare in horse breeds or color patterns.

I hope that clears everything up. Blue roan horse breeds aren’t actually “blue.” It’s the mixture of white hair and black colors that causes the bluish hue. They are a type of roan horse, and a dominant trait causes the roan pattern.

Other kinds of Roans include Red roans with a chestnut base color and Bay roans with a bay base color. Not all horse breeds can be blue roans. Those that can be roans include Quarter Horses, Paso Finos, Belgians, Paint Horses, Percherons, and Welsh ponies.

What do you think of blue roan horses? Have you seen one? Please share your thoughts below! 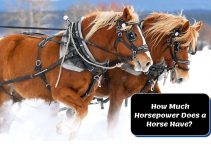