Let’s have some fun and compare Moose VS Horse!

Yes, you read that right!

It’s pretty interesting, so let’s dive in and see how these two majestic animals are similar and different.

How Big is a Moose Compared to a Horse?

How big is a moose compared to a horse? If you’ve never seen a moose up close, you might get shocked at how big, in fact, enormous they are.

So is a moose bigger than a horse? Yes, nearly always! Moose are very tall and have extremely long legs. Which by the way are deadly powerful.

Average horse height sits between 15 to 16.2 hands tall, though there are both bigger and smaller sizes, they are smaller than the largest moose.

The only horses that match a moose for heigh are the large draft breeds, and even very few of these stand 21 hands tall.

The tallest horse on record is Big Jake, who stood 20.2 3/4 hands tall. The tallest moose recorded was killed in the late 19th century and had a should height of 7 feet, 6 inches, which is over 22 hands tall.

Also, don’t forget a bull moose will have impressive antler growth that they shed and get larger each year. These antlers can measure 5 feet, 9 inches from one end to the other. That’s a whole person on top of their head! [2]

Pretty impressive and a bit intimidating.

Learn more about the types of horses breeds.

Fully Grown Moose Next to the Horse

It’s not often you can see a moose next to a horse because they live in different environments. The horse is a domestic animal, while the moose is still very much wild.

However, some equestrians that live in moose habits have encountered them with their horses.

Here is a cute video of a moose family that was keen to share the hay with some ponies. Notice how even the baby moose is much bigger than the ponies.

Just for a little more perspective on just how big a moose is check out this video of a fully grown moose walking down the road. See how much bigger he is than the cars?

The average weight of a moose is 1,800 pounds. [1] When you compare moose vs horse size, that is 800 pounds more than the average horse.

However, some horses can match a moose’s weight, such as the Shire or other heavy breeds.

ALSO CHECK: Mustang Vs Bronco: Are They The Same?

Moose Vs Horse Speed (Are Moose Faster Than Horses?)

Moose are incredibly fast and can run at great speed, without making much sound. A moose can reach a speed of 35 miles per hour. [3]

While the average horse runs 25 to 30 mph. The fastest ever speed recorded by a horse is 55 miles per hour. Which was done over a short sprint by a Quarter Horse faster than the thoroughbred.

Head to our article- the difference between thoroughbred and quarter horse – to learn more.

However, that is extremely rare. Overall a moose is faster than a horse.

Another fun fact about moose is that they are amazing swimmers. They can even hold their breath underwater for around 30 seconds. Moose are much swifter and stronger swimmers than horses and can swim many miles in one go. [3]

Horses come in a much wider variety of colors. Horses can have black, bay, brown, grey, chestnut, or multi-colored coat.

While moose vary in common coat color “from light brown to dusty black, with the face generally dark

brown or black on bulls, and light brown on cows” [3]

The average lifespan of a moose is 15 to 20 years. [1] Which is pretty good considering their size and that they are wild animals.

This is less than the average horse lifespan which is 25 to 30 years. [4] However, wild horses don’t live as long and have the same average lifespan as moose.

Moose don’t cope well with captivity and contrary to what you might first think they have a much shorter lifespan in that kind of environment of only around 6 years. This is why you rarely see moose in a wildlife park or zoo.

You might have heard that you should never get too close to a moose as they can be very dangerous.

While generally, they are docile if you leave them alone and admire them from a distance, it is wise to not harass them or approach them, especially moose cows with young. Remember they are much more a wild animal than a horse.

Instead of moving away, some moose can get aggressive if they feel threatened by humans or dogs. It is always best to give them plenty of space. [5] Their size and strength can kill you or your dog, so leave them alone.

However, you can still enjoy watching them from a safe secure distance. Moose, especially babies are playful, just like foals. Take a look at this female moose and her babies playing in a sprinkler.

While domestic horses can become aggressive or dangerous, their usual first instinct is to move away from something that worries them. As horses have been partners with humans for centuries they are more friendly to them.

They are less likely to attack you than a moose, but caution should always be taken with both, even though the horse is a domestic animal.

Moose are hardy, cold climate animals. They range from the northern United States, across all the northern states, through Canada, and all the way up into Alaska.

A moose does not do well in hot temperatures. The change in the climate’s temperatures and warmer summers is having an effect on their numbers according to the National Wildlife Foundation. [6]

Conservationists are noticing a decline of moose populations. Hotter temperatures aren’t the only things threatening moose habitat.  An increase in ticks and internal parasite populations is also causing a decrease in number.

Like horses, moose are herbivores that browse and forage for food. Horses mainly eat grasses and wild herbs while moose like to eat leaves, twigs from trees, and various shrubs.

This is why you will often see moose in woodlands instead of open prairies. Horses on the other hand, if wild, will spend more time on open land where there are grasses to graze.

Wild horses also like wide open spaces as it allows them to spot danger more quickly. However, they will use trees for shelter.

Of course, domesticated horses have a completely different habitat. They live the pampered life of dry stables with fluffy bedding and well-maintained paddocks.

While booth horses and moose are incredibly strong animals, a moose will have the advantage over most equines.

This is due to their antlers which they can use as a defense. They also have longer legs and bigger hooves which can pack more punch.

However, when thinking about pulling power, it is possible that the big draft horses will have more strength. Drafts are domestic horses bred and built for just this job and have the correct muscles and confirmation to pull immense weights.

Unfortunately, all we can do is have a fun theoretical discussion about it as no one has even pitted a moose against a horse in a pulling contest.

The moose is part of the deer family, Cervidae, and is the largest in this group. While the horse is in the Equidae. In total there are 43 species of deers.

Moose differ from other members of the deer family and do not live in herds. This is different from horses who are naturally herd animals.

A female moose is called a cow moose, while a female horse is a mare. Male moose are called bulls, while male horses are stallions or geldings.

The Alaskan Moose is the largest subspecies.

Canada and the United States aren’t the only regions where you will find moose. The European moose is common in the Baltics, Scandinavia, and Russia. They are sometimes referred to as European Elk.

In total there are nine types of moose.

While it isn’t a good idea to ride a moose like a horse for many reasons, particularly because they don’t domesticate well, it has been done.

In the early 20th century a man known as the Miramichi ‘Moose Man’, aka John Connell from New Brunswick, Canada rescued a young moose that had been abandoned.

John already had horses and experience training them. When he brought the baby moose home he placed it in his horse barn and raised it just like them. He names the moose Tommy.

He managed to train the moose to pull a sleigh and wear a saddle so he could ride. John wasn’t the only person to tame a moose. See pictures of Tommy and learn about other moose stories in the news article from CBC News. [7]

Even though there have been some exceptions like the stories above, it is not a good idea to try and ride a moose like a horse as they have a much more wild nature.

Those that managed it had a rare, special understanding of these animals.

Can moose be domesticated?

Yes, some people have domesticated moose, however, it is rare and not something that can be commonly achieved.

Yes, moose will sometimes attack humans, especially if they are harrassed, approached too closely, have young, and during mating season.

What are the natural predators of moose?

Moose do not have many natural predators but wolves and grizzly and black bears will hunt them, particularly young, vulnerable calves.

Is a hybrid between a horse and a moose possible?

No, a hybrid between a horse and moose is not possible. They have too many differences. It would be as likely as a cat and dog hybrid occurring.

I hope you enjoyed this detailed comparison of moose vs horse. While doing research I learned some cool things about moose that I didn’t know.

Have you ever seen a wild moose up close? I’d love to hear about your experience. 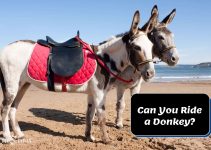 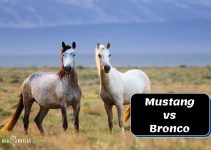