Are you keen to learn about the war horse breeds that helped to shape history?

Then you’re in luck!

Below, I’ll uncover the history of the magnificent, majestic, powerful, beautiful horses that bravely galloped into battle.

Read on to discover more…

Saskia Mier, writing for andalucia.com, explains that the name Andalusian is misleading as the popular breed is not specifically from the Andalucia region of Spain but rather the whole country.

Also known as the Pure Spanish Horse or Pura Raza Española, the Andalusian has been a recognized breed since the 15th century.

Descended from the Iberian horses of Spain and Portugal, they have existed in one form or another since the time of Christ.

The many civilizations that have held Spain over the centuries all utilized the Andalusian in their military ranks.

The Carthaginians used Andalusians in their armies, recognizing their incredible strength and power.

Later the Romans also realized the potential of the Andalusian, using them for transport, as war horses, and as a symbol of eminence for kings and emperors.

The Moors used Andalusians as the mainstay of their light cavalry and sent the versatile breed far and wide across the Islamic empire.

In the 15th century, with the Moors gone, King Felipe II of Spain started a prolific breeding program that set the Andalusian on a course to become the popular horse we know today.

From there on, these horses spread across the globe and were bred to produce breeds such as the Lipizzan, Connemara, and Frederiksborg.

While its name would suggest we know, the origins of the Arabian Horse are debated.

What is certain is that some 1000 years before the birth of Christ, the forefathers of the ancient breed were well established on the Arabian peninsula.

The Bedouins believed Arabians were holy horses created by God. They shared their limited food, water, and tents with them, building a solid bond between rider and horse.

The Bedouin desert tribes bred Arabians as war horses for long treks and fast raids on enemy camps. Speed, endurance, and bravery were qualities that made the Arabian highly successful in this role.

As people from the East rode into Europe to pillage and plunder, European armies were intrigued by the invaders’ small, fast horses.

By comparison, the Europeans had large, medieval war horses bred to carry a knight in full armor.

More on those soon…

As technology progressed and firearms were introduced, heavy armor became a thing of the past.

In the 16th century, armies were looking for small light war horse breeds for their cavalry.

In the many wars and battles that followed, the Arabian proved itself to be an outstanding war horse,

Originating in the Friesland province of the Netherlands, the Friesian breed comes from a medieval war horse bloodline.

These draft horses would have carried knights in full armor into battle with relative grace and agility compared to other heavy war horses.

References to the hardy breed have been found from as far back as 1251. From the 16th century onwards, Friesians get plenty of favorable mentions in the history books.

Beyond this point, advancements in weaponry meant armor and heavy horses were replaced by firearms and lighter, faster war horse breeds.

As a result, Arabian and Andalusian bloodlines were introduced into breeding to create a smaller, lighter coach horse.

Throughout the 18th and 19th centuries, this draft horse breed flourished as harness, working, and royal horses.

The Marwari war horse breed originates from the Marwar region in India. A warrior clan called the Rathores was prolific in breeding these horses as early as the 12th century.

By the middle ages, they had amassed a cavalry of some 50,000 Marwari horses for the Rajput community.

There are many stories of the Marwari saving injured riders by carrying them away from danger and finding their own way home.

This homing instinct is further cited in stories of horses helping lost riders find their way home through the desert.

In the 20th century, with the days of horses going battle long gone, the Marwari breed saw a significant reduction in numbers.

Thankfully, the Maharaja of Jodhpur has made efforts to preserve the Marwari breed and ensure its ongoing survival.

As the name suggests, the Mongolian horse is native to Mongolia and is considered one of the oldest horse breeds still in existence today.

Nomadic Mongolians have been breeding and documenting these hardy horses since ancient times.

This legendary horse breed is famed for its role in Ghengis Khan’s armies during the 13th century as he conquered parts of Europe, China, Russia, and Northern India.

Soldiers took great care of their Mongolians, with each having 4 to 6 horses which they would switch during the day to avoid exhausting any one horse.

The soldiers preferred to ride lactating mares as they would use the milk as a source of sustenance.

Soldiers would sometimes cut a horse’s minor vein and collect the blood to drink.

The Mongolian has a significant place in Mongol culture to this day, and they are still bred and kept in large numbers.

The Percheron originated in the province of Perche in France. This province no longer exists, but it was situated in the South of Normandy.

The true bloodline of this heavy war horse breed is unclear as the region was invaded by numerous civilizations over the 7th and 8th centuries.

In the 9th century, the Vikings visited, bringing war horse breeds from all over the world, including Arabians.

They bred these with native horses, and the Percheron breed is said to have been the result.

In the 17th century, these heavy French draft horses were highly sought after as war horses.

French knights favored them for their strength, intelligence, and temperament.

As the need for heavy armor dwindled, so did the popularity of the Percheron. By the 19th century, they were nearly extinct.

The French government intervened with an effective breeding program that brought the Percheron back from the brink and styled them as cavalry mounts.

The story of the Shire horse is thought to date back to 1066 and the Norman invasion of England.

The horses brought by the invaders bred with local horses to produce the English Great Horse, often mentioned by medieval writers.

This forefather of the Shire was the perfect medieval war horse for carrying knights in full armor into battle.

Breeding strong horses was a high priority in the 16th century. King Henry VIII even passed laws instructing selective breeding only of horses above 15hh.

As the centuries passed and the use of horses changed, so this big horse breed adapted.

Agriculture and industry benefited greatly from the strength and work ethic of this large draft horse.

The Shire horse was called back to service during the 1st and 2nd world wars, where its strength was put to use, pulling heavy artillery.

Medieval war horses were not all tall, stocky horses designed to carry armored knights into battle.

There were actually a few types of war horses that were categorized according to their role.

There were two horses types that served more functional roles…

Palfrey were horses that were used for general riding. They weren’t destined for the glory of the battlefield.

Palfrey is not a specific breed of horse; it’s simply the name given to the horses used in this way during medieval times.

This function of this group of horses is pretty self-explanatory.

This work horse breed was used to pull carts and other demanding work, which undoubtedly helped contribute to the war effort.

The war horse breeds that were taken to war were generally known as chargers. Chargers could be broken down into two main groups.

Let’s see what they were…

Destriers were the most famous and renowned of war horses in medieval times. Despite this, they were not the most common due to their expense.

These horses were tall by medieval standards; however, they were smaller than many modern draft horse breeds.

Destriers were strong, agile, and a great source of pride and status for their owners.

They would often be used in tournaments and jousting as well as in battle.

I couldn’t help but think of the word destroyer while researching these horses and wondered if there was a link to this word being used for battleships.

Sadly it would appear this is just a coincidence as there is no evidence supporting such a link.

Coursers were by far the most common type of medieval war horse seen in battle.

They were strong and fast while being smaller and less expensive than destrier war horse breeds.

As coursers were the most common type of charger being ridden by knights and soldiers, the terms were used interchangeably in the medieval period.

Interestingly, while horses were often ridden into battle, the circumstances or terrain would often mean fighting on horseback was not an option.

Cavalry charges were not a common occurrence.

Instead, knights and soldiers would dismount and leave their horses somewhere safe before going into the thick of the battle.

While many military forces across the world maintain a small number of horses for ceremonial duties, some still use horses in an operational capacity.

India’s 61st Cavalry Regiment is an operation horse-mounted unit. They are thought to be the last such unit in the world.

They operate primarily in desert regions where large vehicles would quickly get stuck.

The Indian cavalry unit has an internal security role and rides out to the countries borders to support the Indian Border Security Force.

The Chilean army uses horses on scouting patrols in the Andes mountains. The routes are impassable by vehicle making horses the ideal way to carry out these patrols.

Reconnaissance Batallion 230 of the German army keeps a small number of mules and horses to carry loads on recon patrols.

The horses are generally only used for cargo, but can be ridden if there is a need for the mobile unit to cover ground quickly.

US Special Forces and Marines

Following the special forces use of horses during the 2001 invasion of Afghanistan, the US army has been keen to explore their ongoing use.

The primary deployment appears to be similar to the German military pack horses, but time in the saddle has also been explored.

What breed of horse is a war horse?

There is no one breed of war horse. Many nations and civilizations developed war horse breeds from their native stock and developed them to suit their environment and style of fighting.

Destrier is not the name of an actual medieval war horse breed but a general type of battle horse. Modern Shires, Friesians, and Percherons are all descended from horses that would have been destriers once upon a time.

Wow, I feel like we covered a lot in this article on war horse breeds.

It’s humbling to think that the ancestors of our modern horses were forged in the heat of battle.

Many of the bloodlines can be traced back to those horses first bred for their abilities in war.

Conflict still exists in the modern world, but thankfully, horses no longer play a role.

I hope you’ve enjoyed reading about the history of war horse breeds as much as I’ve enjoyed the process of writing it.

Do you have any interesting facts about war horse breeds? Share them in the comments below!

Barry Stingmore is a British content writer living in Fuerteventura, Spain. An animal lover at heart, he shares his home with a dog and four rescue cats and has a passion for writing about animals big and small.

He has only ridden a horse once but spent a lot of time working alongside them in the British police. 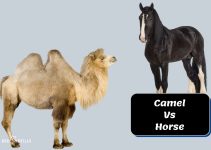 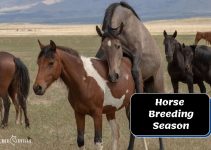